The Maryland Department of Veterans Affairs is honored to share the following remembrances of military service members.  For information on how to share a remembrance please scroll to the bottom of the wall. 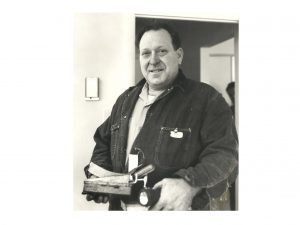 Service Era: June 1, 1942-June 25, 1945
Narrative: Dad worked on the boilers on the ships.  “Oiler” was his rating on one certificate indicates his rating as ACT. 2nd Asst. Eng.  All the ships he was assigned to were steam vessels.  Ships with discharge certificates included: Saint OLAF, S.S. Franklin P. Mall, S.S. John L. Elliott, S.S. Lyman Abbott, Frederick Victory.  He went into business later as a small business contractor, Edward R. LaPaglia and Sons in Baltimore, Maryland.
What he would want us to know: First of all allow me to say thank you to all service people.  Dad would often say, ” you are what accompanies you,” which means keep good company and then do it right the first time, so you won’t have to be back.  Dad taught us to treat each other as we would want to be treated.  Fairly.
Honored by: Theresa Masilek, Daughter

PFC Lawrence V. Barrack, United States Army
Service Era: World War II
Narrative: PFC Barrack was  killed in action serving with the 77th Statue of Liberty Infantry Division on the Island of Guam.  PFC Barrack a platoon runner, put himself in danger on two separate occasions, December 19 and December 20, 1944.  During the last courageously performed mission, Private Barrack was mortally wounded.  His sister, Louise A. (Barrack) Booth of Belle Haven, Virginia, received his bronze star medal, awarded posthumously.  He was one of 8 siblings.  He made the final sacrifice because his country needed him and he loved his family, his fellow soldiers and the U.S.A.
Honored by: Lou Etta (Booth) McClaflin, Niece 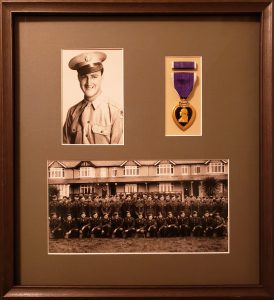 Service Era: 1943-1944
Narrative: Virgle was born in 1923 in Arkansas and grew up in Missouri.  He joined the Army in February 1943.  He trained as a radio operator and served in Company A, 149th Engineer Combat Battalion, U.S. Army Corps of Engineers.  On D-Day, June 6, 1944, he landed on Omaha Beach in the first wave.  He was still serving at Omaha Beach when he was killed on July 3, 1944.  He is buried at Normandy American Cemetery in Colleville-sur-Mer, France.
What he would want us to know: We did our jobs without reservation so that every American could live in freedom and enjoy its blessings.
Honored by: Lt. Cdr. Joseph T. Stanik, U.S. Navy (Ret.), Nephew 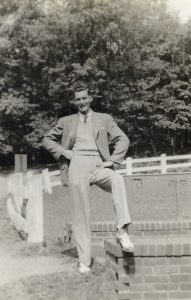 Service Era: World War II
Narrative: Tech 5/G Jonas Harrell served in the 325th Medical Battalion, 100th Infantry Division during World War II.  He grew up in North Carolina and was the first born son in his family.  He was killed in action on Thanksgiving, November 23, 1944.  He was the first to be killed in his company after volunteering for a mission.  He is interred at Epinal American Cemetery in France.
What he would want us to know: Be proud of your country, respect your flag and wave it high, and never forget those, including myself, who sacrificed their lives so you can enjoy your freedom.
Honored by: Peggy Lee Burl, Niece

Corporal Kenneth H. Bargmann
Service Era: 1942-1945
Narrative: Corporal Ken Bargmann was a 20 year old Ranger who scaled the cliffs at Pointe du Hoc (France) on D-Day.  Two days later after he’d scaled the cliffs in a counterattack he was taken prisoner of war.  His military awards include the Bronze Star Medal, Purple Heart Medal, POW Medal, Global War on Terrorism Medal, Good Conduct Medal, Combat Infantryman Badge.  He was a native of Washington D.C. and grew up in Silver Spring.  He was a graduate of Blair High School, the University of Maryland and the Washington College of Law, now part of American University.  He later served as Special Assistant to the Secretary of Veterans Affairs and later as Executive Director of American Ex-Prisoners of War Association until his passing.  Corporal Bargmann ultimately died of service connected injuries and is buried at Arlington National Cemetery.
Honored by: Michael Bargmann, Son 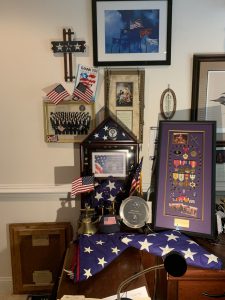 Anthony Michael Notich, United States Army
Service Era: 1969
Narrative: Anthony experienced a traumatic experience which resulted in his loss of life on June 16, 1969.  He died as a result of hostile action in South Vietnam, Kien Koa Province.
What he would want us to know: My earliest memories of a childhood friend were with Tony.  We grew up together and even though that was many decades ago, I still remember him in my prayers and hope that when he looks down on me, he smiles.
Honored by: James R. Barton, Friend 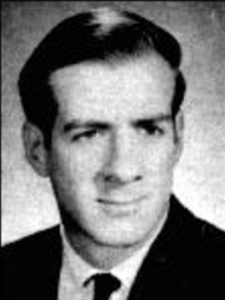 Service Era: Vietnam
Narrative: WO Shields was killed August 15, 1969 while flying a helicopter mission over the Quang Ngai Province in Vietnam.  He was a native of Montgomery County.
Honored by: George Owings III, Friend 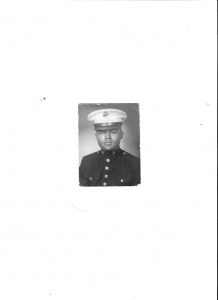 Service Era: 1967-1970
Narrative: Lance Corporal Butler, a recipient of the Purple Heart, was one of four male siblings in his family to serve in the armed forces and the only marine.  Stanley survived the combat injuries he sustained but later became ill and died June 10, 2012 from diseases that were attributed to his exposure to agent orange which was used in the jungles of Vietnam.  We miss Stanley every day and especially on Memorial Day.
What he would want us to know: It was tough being a marine, but he was proud to have worn the uniform and to have served his country.
Honored by: Lt. Col. Joseph N. Butler, U.S. Army, Ret.

John Frawley, Korea and Vietnam
John J. Bauer, United States Army, Vietnam
Joseph Harris, United States Army
What they would want us to know: Our family, everyone who served was proud and honored to serve our great country.  But as a footnote I want to mention the other heroes who gave so much with little or no recognition, the spouses, mothers and fathers who prayed, worried and communicated with loved ones while serving.
Honored by: James E. Harris, Jr., United States Navy, Vietnam, Family Member 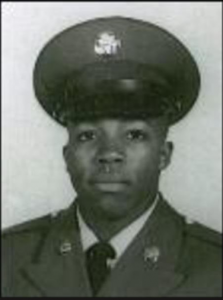 Service Era: Vietnam
Narrative: SGT Sherwood Reynolds was originally from Prince Frederick, Maryland.  He was killed in action in the Long An Province on February 26, 1968.
Honored by: George Owings, Secretary, Maryland Department of Veterans Affairs 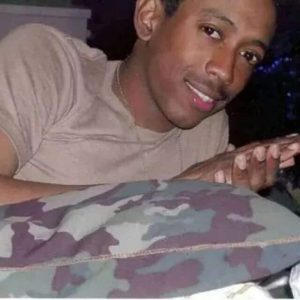 Service Era: Operation Iraqi Freedom
Narrative: Kendell was a mechanic and was deployed to Iraq and was on his second tour when he was killed by an IED.
What he would want us to know: Kendell was a fun loving and very funny young man.  Always smiling and trying to make everyone around him laugh.  He loved being a big brother to his two sisters Kennisha and Kendra and his baby brother Kwesi.  Kendell was killed October 19, 2005 while on his way to be fingerprinted for his citizenship application.  Later, Kendell’s mother and mother’s husband petitioned Congress and with the help of former Senator Barbara Mikulski saw the Kendell Frederick Citizenship Assistance Act signed into law.
Honored by: Michelle Murphy, Mother 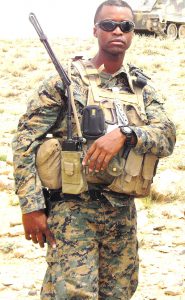 Service Era: Operation Iraqi Freedom and Operation Enduring Freedom
Narrative: Captain Melton enlisted in the Marine Corps after his first year at Messiah College.  He attended Officer Candidate School and received his commission as a Second Lieutenant in June 2000.  He was promoted to Captain in 2005.  He served two combat deployments, the first in 2005 to Iraq and the second in 2008 to Afghanistan.  He volunteered to take the place of another Marine on a convoy the day he was killed.  He and Navy Corpsman Eichman Strickland were killed in action September 9, 2008 when their vehicle rode over an IED.  Captain Melton was posthumously awarded the Purple Heart, Bronze Star Medal with a combat V for valor, Joint Service Commendation Medal, Combat Action Ribbon and NATO International Security Assistance Force-Afghanistan (ISAF Medal).  He was an avid reader, an athlete, and an active member of his church.  His favorite pastimes were salsa dancing, scuba diving and martial arts.
What he would want us to know:  He took the place of a fellow Marine on the convoy the day that he was killed.  The Marine’s daughter was born two days later.  He wanted to change the world and make a difference and do something that would bring God glory.  He did not allow adversity to deter him from reaching his goals.  He loved God and his neighbors as himself.  He considered it an honor and privilege to serve his country.  He stressed the fact that he volunteered to serve and that he was willing to take a bullet for his fellow Marines.  If he were to be killed during combat that it would be a win-win situation, because he would go home early to be with Lord.
Honored by: Janice Chance, Mother 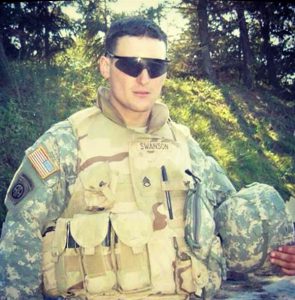 Service Era: Operation Iraqi Freedom
Narrative: Chris joined the Army in August, 1999.  After graduating from boot camp in Ft. Benning, Georgia he served as a rifleman with the 1st Battalion, 325th Infantry of the 82nd Airborne Division, located at Ft. Bragg, North Carolina.  He spent six months in Kosovo as part of a peace keeping mission and was deployed for 10 minutes during the initial invasion of Iraq.  In December 2003, he reported to Company B, 2nd Battalion, 6th Infantry Regiment, of the 1st Armored Division, located in Baumholder, Germany, where he deployed for 14 months for his second tour.  In November 2005 he deployed for his third tour.  In May 2006 his unit was sent to Ramadi, Iraq located in the Al Anbar Province.  Chris was killed July 22, 2006 by a sniper while he lead his squad during combat patrol.
What he would want us to know: Chris would want everyone to know that he loved growing up on the Chesapeake Bay.  He loved his blue crabs.  He loved sports.  He loved helping others and especially those less fortunate than him.  But most of all, he loved God, his family, and his country.  He would also want everyone to know that “our FREEDOM does come with a cost,” and “For those who fight for it, freedom has a taste that the protected will never know.”
Honored by: Gary and Kelly Swanson, Parents 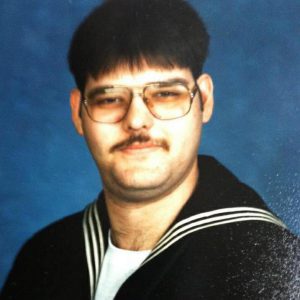 Service Era: 1986-1988
Narrative: Wayne (as he was known) was an aviation ordnanceman airman on the USS Coral Sea.  He was killed onboard during a severe storm while securing a piece of equipment on the sponson.  He was killed January 31, 1988.
What he would want us to know: He would have wanted us to know that no matter how tough life is, you can always find joy in it and to love life to the fullest no matter what.
Honored by: Crystal Wilson, Sister

To share a story of remembrance for the virtual wall, please email the following to remembrance.wall@maryland.gov:

*By emailing this information to remembrance.wall@maryland.gov, the sender agrees to have the information contained therein shared on the MDVA website and other MDVA social media channels.  You are encouraged to share photos.*