This past Saturday, June 13, 2020, The United States Military Academy at West Point graduated 230 women as Commissioned Officers.  As I sat watching the graduation, held with social distancing and crisp white chairs posted six feet apart, I was honored to see so many women among the ranks of graduates.  While there is still work to be done, women have come a long way since they were first admitted in 1976 to West Point. 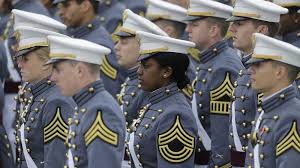 This year marks the 40th graduating class with women at the Academy.  With a motto “Duty Honor Country”, women can now attend Ranger School and branch infantry and armor.  Women in service today are making Rosie the Riveter proud.  With less than 10 percent of all applicants receiving acceptance to West Point, women are joining the esteemed ranks of the officers before and beside them.

Earlier this year, our Governor announced 2020 as “The Year of the Woman”.  MDVA has made it a point to highlight the women who serve on our various veteran commissions.  We’ve had the opportunity to share their biographies and stories of their military service.    Our electronic newsletter is an excellent source of information but it is also growing to include human-interest stories.  I recommend all who read this blog to enroll to receive it!  (sign up at veterans.maryland.gov)

For now though, let’s get back to celebrating women in military service by taking a walk back in time.  Going back as far as 1775 women served during wartime as nurses, cooks, and even spies.  In 1866, Cathay Williams was the first and only African American woman to enlist as a Buffalo Soldier, but only after using a male name.

More than 400,000 women served in what were considered ‘noncombat roles’ during World War II.  Interesting to note however is that 88 were captured as prisoners of war and 16 were killed in action.  It was only in 1948 that women began to serve as permanent members of the military, no longer only serving during wartime.  More than 50,000 women served during the Korean War and 11,000 women deployed to Vietnam, with 90% of these women serving as nurses.

Despite their many accomplishments, women continue to face adversity during service. The US Department of Veterans Affairs is working to combat the challenges experienced and the difficulties following separation from service.  All VA medical centers now have Women Veteran Program Managers and the VA maintains a nationwide Women Veterans Call Center.  To learn more, call 855-VA-WOMEN or visit the VA Women Veterans Program.

On behalf of the entire MDVA, I say thank you to our women who have bravely served the nation in times of war and in peace.  Congratulations to our recent academy graduates, in the words of the Air Force, ‘Aim High!’

Sources: Wikipedia, Task and Purpose, Department of the Army